With a focus on the Bay Area’s queer arts community, QCC has achieved national visibility and recognition by employing the arts to advance cultural equity and social justice.

We believe that community building is key to social change and that we can envision this change through the arts.

We actively nurture the artists with whom we work, contributing to their artistic and financial development.

We learn from both established and emerging artists and scholars who are actively contributing to a global discourse on queer culture.

We believe in freedom of expression and treat others with compassion and empathy.

We believe in the power of making our culture visible, valuing the legacy and preservation of queer arts.

We believe power is built through collaboration and alliance building with a broad range of communities and organizations.

The San Francisco Bay Area has been home to many artists and non-profit arts organizations for decades. While it has boasted its share of museums seeking to make their mark on the national arts landscape it has also witnessed the renaissance of a burgeoning and culturally diverse community arts base. Often regarded as the “step-child” by the more lofty and well heeled mainstream arts institutions, these groups have nevertheless survived in a severe climate of diminishing arts funding coupled with unprecedented arts phobia from the highest levels of government. This precarious nature of the arts was illustrated recently by debates over the continued existence of the National Endowment for the Arts. The agency barely managed to survive for another year signaling a cautiously hopeful sign for struggling arts groups.In 1993 friends in the arts and politics of the lesbian and gay movement based in San Francisco joined forces to create the San Francisco Lesbian and Gay Center for Art and Culture. Recognizing that there was no repository for actual works of art nor any place to incubate ideas relating to gay culture, organizers began to map a plan for the achievement of this visionary goal. Many of its founding members were veterans of then Mayor Art Agnos’ Cultural Affairs Task Force which convened in 1989 and determined that there were profound inequities in the City’s distribution of arts funding. At issue was the pattern of major arts institutions such as the local opera, symphony and museums enjoying the lion’s share of available municipal dollars while the smaller to mid-sized non-profits, often run by women, communities of color and lesbians or gay men, were left to survive on disproportionately paltry sums.While the majors argued that they deserved more and stated that, percentage wise, they received no more or less than their due, no one could seriously dispute the fact that these monies were handed out with virtually no mechanism for public scrutiny, a policy which outraged the smaller arts groups. Furthermore, while these same major institutions claimed that their larger audiences justified their larger budgets, few could ignore the fact that their major donor base of support came from the city’s more affluent citizens, a luxury far removed from the day to day realities of the struggling community based venus.
Given the ethnic demographics of the Bay Area alone, it was clear that city policies had not kept pace with changing times and populations. Political activist and photographer, Carol Stuart and artist and activist Rudy Lemcke enlisted writer and arts consultant, Jeff Jones and set designer and assistant artistic director for the gay performance group Theater Rhinoceros, Pam Peniston to organize around the idea of creating an LGBT Museum. They were later joined by photographer Greg Day; painter Lenore Chinn; curator Adrienne Fuzee; filmmaker Osa Hidalgo-de la Riva; photographer Freddie Niem and performance artist Blackberri to form the first board of directors of the San Francisco Center for Lesbian Gay Bi and Transgender Art and Culture. 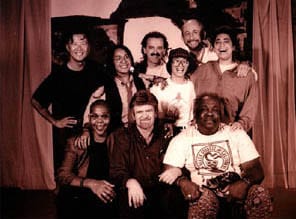 As the first in a series of efforts to lay the groundwork for the concept of a museum SFLGCAC positioned itself within Proposition A, along with the Asian Art Museum and the Steinhart Aquarium. The 1993 bond measure would have allocated funds to begin a site search and establish physical space for the cultural center. The initiative narrowly missed capturing the two-thirds majority of votes needed to assure passage but did not dampen the long range objective of creating a cultural facility. Instead, the group began establishing ties with the city’s existing cultural centers and their allies. This included the Center for African and African American Art and Culture, the Bay View Opera House, the Mission Cultural Center for Latino Arts, the Indian Center for All Nations, South of Market Cultural Center and the Chinese Culture Center. Finding common ground in the need for establishing a permanent and stable funding source, growing an audience that reflected the current demographics of a very diverse Bay Area, and securing buildings for both the Native American and the LGBT communities, these arts organizations united as the Consortium of San Francisco Community Cultural Centers. Its members, long operating a world apart from the resources of the more powerful and well established mainstream elite, began a long and arduous fight for cultural equity in the city’s allocation of arts funds.

In 1995 the group won inclusion of two key provisions in the newly revised City Charter. These line items committed the City to supporting and maintaining the buildings housing its four cultural facilities as well as to buttressing the financial infrastructure of each center. This move laid the groundwork for arts lobbyists to establish a permanent funding base for its programming activities and to begin creating extensive cross cultural collaborations for future projects.

In June 1997 the coalition launched a new campaign for a bond measure, Proposition B, in a bid to secure funding for the construction and reconstruction of the city owned cultural facilities as well as provide for their seismic upgrading and removal of toxic hazards. It would also fund the acquisition of space for Qcc as well as for the Native American Cultural Center and a Pan Asian American Cultural Center. This too went down to defeat but what emerged was a more solidified arts constituency rooted in the concept of urban economic vitality through the arts.

In a phenomenal coup for the city’s four cultural centers the San Francisco Board of Supervisors in 1997 approved a line item within the city’s Hotel Tax Fund. What this meant for the centers was a significant increase in funds allocated to their annual programming budgets. Qcc, as part of the negotiating team of centers attempting to move the city toward cultural equity, became a partner in the plan to develop a stronger cultural base for the struggling non-profit venues. Philosophically and practically Qcc believed that creating a healthy economic environment for the four city cultural facilities was critical to the survival and future of all members of the Consortium.

In the early years Qcc was largely an ad hoc lobbying force which sought to change the city’s arts policies through political leveraging. Seeing that historic attempts to establish a cultural center for the gay community often succumbed to poorly planned strategies or simply the winds of political change, organizers took the longer but perhaps more established route of long range planning. It developed working relationships with local arts activists and supported a series of arts events through shared technical assistance, publicity and grant writing workshops. Preliminary needs assessments were conducted through town-hall meetings and surveys. Clearly the playing field for the state of the arts in the West has undergone profound changes. The need to preserve community based arts programs as government agencies apply cuts to the arts in public schools, to create policies for urban revitalization through a strengthened arts economy and to construct institutions which keep pace with the needs of a rapidly expanding and diverse population has produced a new crop of arts activists. These new pioneers have paved the way for a broader interpretation of the role of art in society by redefining the politics of art in this region.