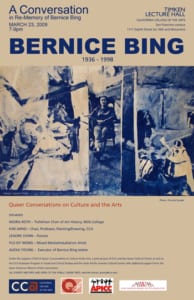 Queer Conversations on Culture and the Arts (QCCA) Presents:
A Conversation in Re-Memory of Bernice Bing
(1936-1998)

Visionary lesbian painter Bernice Bing had a catalyzing effect on a group of people who came together after her death to remember and honor her life, and who remain loosely connected. Lydia Matthews writes of Bing, “Hers was a powerfully sustained yet quiet career. This kind of artist can easily fall through historical cracks if we do not diligently keep her memory alive.” Indeed, Bing has largely fallen through the cracks, though in her time she was quite visible. There are so many dynamic facets of Bing’s life: A former student of CCA and SFAI, Bing studied with Sabro Hasegawa who introduced her to Zen and Chinese Painting while being deeply influenced by her studies in Abstraction with Richard Diebenkorn and Nathan Oliviera; Bing was part of the early Bay Area Ab Ex movement and prolific as a Beat Artist. She received early critical acclaim for her work with a 1963 and 1964 Artforum review and was among a number of young women during the 1950’s who would make up the first generation of post-war women artists in California. Bing was deeply devoted to the process of abstract art while being involved in community-based activism and administrative duties such as her role as the first Executive Director of the South of Market Cultural Center, now known as SOMArts, and a founding member of the first Asian American women’s arts organization, AAWAA.In an effort to keep Bing and her oeuvre alive in the present, please join us for an evening of historical musings and a critical re-framing of the life and times of Bernice Bing.Under the auspices of QCCA–Queer Conversations on Culture & the Arts, a joint project of CCA and the Queer Cultural Center as well as the CCA Graduate Program in Visual and Critical Studies and the Asian Pacific Islander Cultural Center with additional support from the Asian American Women Artists Association.Queer Conversations on Culture and the Arts brings together locally and nationally renowned artists, writers, filmmakers, and scholars for a series of conversations to discuss a broad range of LGBTQI topics in the humanities, architecture, design, and the arts. QCCA is an on-going collaboration between the Queer Cultural Center and California College of the Arts.