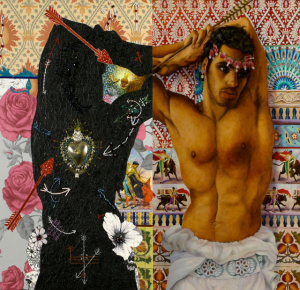 My approach to the studio and painting comes from an intuitive relationship I develop with the people that surround me, along with my Spiritual beliefs, environment, and memories from the perspective of a Latino gay man.  My art encompass oil paintings and mixed media works inspired by supernatural forces influenced by Afro-Cuban religions and spirituality, more specifically the Santeria religion, as well as culturally dominant fantasies about masculinity and sexuality. Santeria or Orishá worship…teaches gay people how to recognize the divine within himself or herself, which is an important building block to achieving self-esteem. In Latin religious practices –Santeria is one of the few avenues available to gay men, women, and heterosexual women, in which they could achieve a measure of real power and meaningful roles.

In my work, the juxtaposition of the painted male figure to the dark Shadow plays a major factor not only in the composition and structure of the painting but also symbolically; there exists an interaction of the sacred and the secular, gender ambiguity and gender manipulation.  In the Shadow, I use ideograms found in indigenous religions as an inspiration for personal and spiritual transformation. The painted male figures are at times androgynous: the masculine and feminine are sometimes reflected so completely in the body of the figures, it’s as if they have two Spirits.