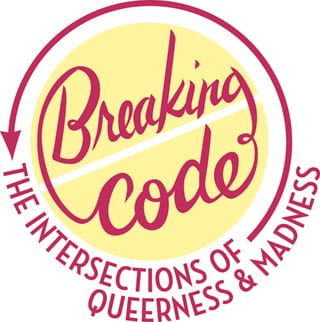 Many of our communities have not yet embraced candid conversation about mental health; Breaking Code gathers Queer and Trans visual and performing artists seeking to claim the ways madness informs, complicates, and sweetens our lives. Together we will use the tools of reclamation and subversion, that many of us develop as we come to a queer identity, to rethink our relationship to mental health.  As artists and community members we will explore the ways queer and crazy have been forced together and forced apart. In this space of intersection we’ll explore the differences in how we are assigned and how we experience madness and queerness. With power and vulnerability, we continue the legacy of resisting shame by claiming our wholeness.

Comedy, dance, storytelling, sculpture and more, are all tools to help us name, and honor, our joy, our struggle, and our resistance. 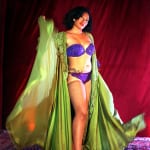 The Lady Ms. Vagina Jenkins has been performing burlesque for over 10 years. The Lady is also a writer, artmaker, costume designer, stylist and chronically depressed person. Ms. Jenkins’ piece for “Breaking Code” explores the ways in which she uses dance to ground, soothe and heal herself. More info regarding The Lady and her work can be found at www.VaginaJenkins.com 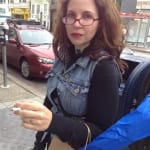 Meliza Bañales is the author of Say It With Your Whole Mouth (poems), the forthcoming 51 Poems About Nothing at All, and the forthcoming Life Is Wonderful, People Are Terrific (stories).  She was the first Latina on the west coast to win a national poetry slam championship in 2002 and she has toured with Body Heat and Sister Spit.  Her short film with J. Aguilar entitled Getting Off won the Jury Award at the Los Angeles Transgender Film Festival in 2011 and her spoken-word album, And Now Introducing Missy Fuego, is expected at the end of 2014 on Crunks Not Dead Records.  She lives in Los Angeles. 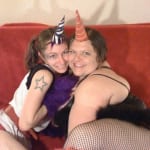 Dirty D: Southerner by way of Brooklyn, charmed by all things rollerskates and difficult.  Mental health professional and consumer.  Choreographer of dance and spinner of fire.  Sometimes social and sometimes scared.  Honored to have shared years of intimate creative performance space with the Cuntry Kings of Durham, NC and ButchTap of Oakland, CA.  Influenced by multiple beautiful artists along the way.  Finding personal growth and insight among heartbreak, struggle, and laughter.

After spending the first two dozen years of her life in the Bluegrass state, Kentucky Fried Woman has been living and loving on the West Coast since 1999.  Her obsessions include Southern Living recipes, Oscar nominated and winning films, and San Francisco tourist destinations.  She is a Dancer, Singer, Writer, Speaker, Event Producer, Community Mommy and cat who has been seen on the stage as a soloist, in collaboration with other queer performing artists, and in troupes such as CHUBB and ButchTap. She feels immense gratitude to those that paved the way for a fat, queer, tap-dancing, femme with OCD, Depression and Anxiety to practice her art in the spirit of visibility, connection, tender vulnerability, resilience, and joy. 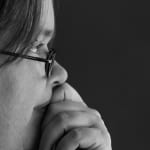 Renee Garcia is a fat, *queer, *disabled, *femme, writer and sex educator in the Bay Area. She was a founding member of Dirty Ink- a Dyke Writing Collective where she learned to fall in love with the intimate deep connection that only happens with an audience. She is the founder of Write The Fuck Now where she shares her raw daily writing practice and works to make space for writers and artists to engage with their work. Her writing life is influenced by her background as a poor/working class outlier and her social justice work with families and educators in Bay Area Schools.  Renee calls ‘self care’ ‘necessary shit’ and thinks that every once in a while art and writing should make people as uncomfortable as reality can be. *These qualifiers are changeable and whatever she wants them to be. 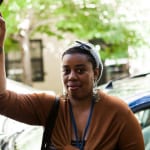 Nicole Goodwin is currently a literature fellow for the 2013-2014 Queer/Art/Mentorship program, was the recipient of City’s College’s The Riggs Gold Medal Essay Award for 2011, finalist for the Poets House’s 2013 Poets House Emerging Poets Fellowship Program and a fellow of the North Country Institute and Retreat for Writers of Color. She is the former editor of the Escriba/Write, and winner of the 2006 CCHA Eastern Region Small Journal Award. A single mother, she earned her Bachelors of Arts in English and Anthropology from City College of New York in June of 2011. Recently, she published an article “Talking with My Daughter…” for the New York Times Parents Blog, and will be featured in the upcoming documentary film “Tough Love.” 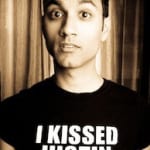 Manish V. is a life coach and the Artistic Director of Peacock Rebellion, a queer people of color -centered crew of artist-activist-healers who make sassy sexy art to help build a culture of social justice. His book Love Poems for Haters debuts this Fall. Follow him at www.valleyofthedals.net. 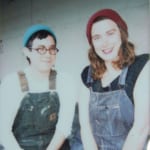 Thunder Thighs and A Thimble of Light is a collaborative project between Sally Louise Polk (Thunder Thighs) and Ida Thaler (A Thimble of Light). Thunder Thighs uses a violin, guitar and loop pedal while A Thimble of Light manipulates light and shadow with an overhead projector to create a soulful and haunting audio/visual experience. Sally Louise struggles with depression and anxiety and Ida has been fighting off The Black Hole of Despair that has existed inside of their brain since adolescence. They both hope that tonight’s performance will help audience members feel less isolated in their struggles with mental health. Check out facebook.com/thunderthighss for more. 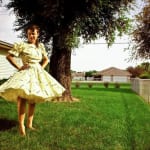 Mister Ri Molnar is a nobody currently based in rural Ohio.  The only place they are tryin to get to is love and they believe in every moment along the way.  See what they’re up to at mister-ri-molnar.tumblr.com 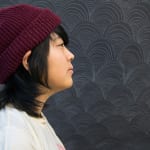 LOSTBOY was born in Southern California in 1987. LOSTBOY is a queer first generation Korean American who works with traditional mediums such as pencil and pen, but has also ventured off into installation work with themes around identity, affirmations, and space. LOSTBOY received their BFA at Pacific Northwest College of Art in 2010 after a short jaunt with animation at Cal Arts in 2007-2008. They have recently participated in events such as Imagining Time, Gathering Memory: Dia de los Muertos at SOMArts and have been on online publications such as Konversation. They are currently living and working in Oakland, California. https://lostboyillustrations.squarespace.com/ 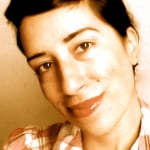 Heidi Andrea Restrepo Rhodes is a Queer, Sick, Feminist, Colombian Mestiza, writer, scholar, artist, and political activist. Her performance, creative writing, and photography have been seen or are forthcoming in places such as San Francisco’s SomArts, Galería de la Raza, the SICK Collective, Mixed Up! A Mixed Race Queer and Feminist Zine, Brown and Proud Press, Harvard’s Queer, The Progressive, Codex, Wilde, Yellow Medicine Review, Mobius, the Blue Lyra Review, and various anthologies. She has her MA in a social justice and anti-oppression-based anthropology. She currently lives in Brooklyn. 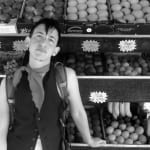 Micah Bazant is a visual artist and graphic designer living in the San Francisco Bay Area. He believes that, in the words of Toni Cade Bambara: “the role of the revolutionary artist is to make revolution irresistible,” and to that end he often creates work collaboratively with social justice organizers across the US. Micah created the trans zine Timtum, co-edited The Love and Justice Haggadah, and is a member of transtorah.org. His recent project, Miklat Miklat, is about transformative justice and exploring concepts of scapegoating and cities of refuge. He also loves growing food and discovering the secret histories of plants. 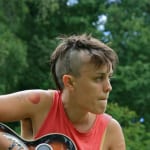 Catherine Edgerton is a white, queer, bi-polar artist and musician who was born and raised in Durham, North Carolina. Between tours to here-and-there with various music projects, she’s worked with social justice groups and organizations such as El Kilombo Intergalactico, the Durham Bike Coop, and Bull City Headquarters. She’s been keeping collage journals since she was twelve (she’s now thirty-one), and has recently begun exploring expressions in stained glass. Glass work has been an important way for her to let light in through old walls, literally as well as figuratively. She’s currently working with others to form a mental health and arts collective in Durham. Their hope is to foster creative gifts and strengths as a foundation from which to provide support for struggles with mental health and addiction. 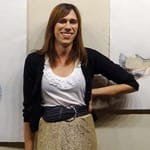 Jos Truitt is writer, speaker, and printmaker native bostonian. She is Executive Director of the award-winning site Feministing.com, where she writes about including transgender issues, abortion access, and media representation. Jos completed her MFA in Printmaking at the San Francisco Art Institute in Spring 2013.  She has shown work at the Kinsey Institute, the Center for Sex and Culture, the San Francisco Old Mint, SOMArts, Hampshire College Art Gallery, and the Swell Gallery at SFAI. Jos makes prints about mermaids. Learn more at http://jostruitt.com 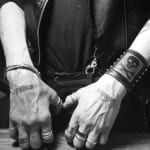 Becka Shertzer. Is a queer artist deeply committed to community and the Arts. Their life has been truly dedicated to creating community through art, and political action. Becka is an old queer punk rocker. They have passionately, created, curated, painted, sculpted, and screamed in studios, galleries, and the streets from Boston, to NYC, Washington D.C. and here in the Bay area. They struggled for many years, with addiction, madness, gender, and sexuality. Becka was institutionalized at 14, and on their own at 15. They Suffered the depths of anxiety/depression/demonic paranoia, and illness. Becka is moved, challenged, perhaps even possessed in their attempts to understand, and articulate the world around them. Their work focuses on issues of transformation, metamorphosis, release, redemption, Loss, trauma, anguish, recovery, healing tension, sex, power, passion, and pain. They have been clean and sober for 26 years. And have come to believe (out of necessity and survival) in the power of Art, passion, love and rage, reaching deeply into their experience these powerful images draw you in. Becka is inspired by the creativity, tenacity and dedication of the fierce love art warriors in their life and has come to believe it is in this …creation and community …that our survival depends. 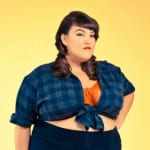 Blyth Barnow is a white, working class, queer femme who was raised in the Midwest. She was diagnosed as Bipolar at age 15 and has navigated the sweetness and struggle of mental health ever since. She is a kind hearted, take no grief, kind of femme who deeply values nuance and respect in art and organizing. She is a writer focused on stories of survival and a community organizer working towards safer and more joyful communities. More of her work can be found at  missfist.blogspot.com 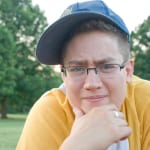 E. Oscar Maynard is a white, genderqueer with a class privileged background, from the Southeastern U.S. who proudly claims crazy. They have a self-designed B.A. in Visual Art, Psychology, and Gender Studies from Antioch College and an M.F.A. from San Francisco Art Institute in Printmaking.  Their work has been shown at Somarts, Mission Cultural Center, and in a number of the National Queer Arts Festival shows. Their projects have focused on gender and intersectional identity within the queer community. Their most recent, and ongoing project is an attempt at queering the phenomenon of evangelical tent revival.  In their spare time they nerd out about gender, feed wild animals in local parks, carve gourd luminaries, and make new things from the Southern Living magazine recipes section.  More of Oscar’s work can be found at countrycounterculture.com

Additional funding received by Endeavor Foundation For The Arts and The crEATe Fund.