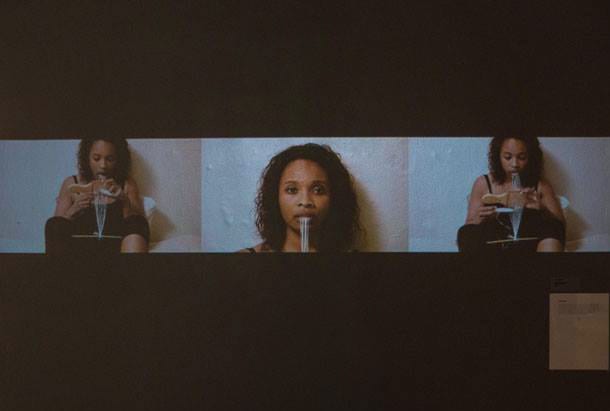 The word text is rooted in the Latin verb texere, which means ‘to weave’. I am a writer and performance artist thinking through craft, generating texts that exist as woven objects and time-based works. By performing craft processes, I explore alternate modes by which documentation can occur. By securing warp threads to my teeth in an oral loom, the act of speaking about disability not visible to others creates a woven document – proof of the substance of my word.

Indira Allegra explores practices of documentation through poetics and text/ile performance. She is a recipient of Oakland Individual Artist (2015) and Queer Cultural Center grants (2014) and has been honored with the Jackson Literary Award (2014), Lambda Literary Fellowship (2012) and Windgate Craft Fellowship (2015). The Windgate is awarded to artists who represent the future of contemporary craft as determined by an international panel of curators working with the Center for Craft and Design. Her commissions include works for the de Young Museum, SFJAZZ Poetry Festival, the City of Oakland and the National Queer Arts Festival. Her time-based works have screened at festivals such as MIX NYC (2013), Perlen Hannover LGBT Festival (2010), Bologna Lesbian Film Festival (2010) and Outfest Fusion (2009).

Allegra’s writing has been widely anthologized, she has contributed works to Cream City Review, HYSTERIA Magazine, make/shift Magazine, Konch Magazine and Yellow Medicine Review: A Journal of Indigenous Literature, Art and Thought among others. In 2014 she was the Dr. and Mrs. Ella Tag Lecturer at East Carolina University and a Lylle Parker Women of Color Speaker at the University of Oregon. A former artist-in residence at The Banff Centre in Canada, in 2016, she will be an artist in residence at Takt in Berlin.