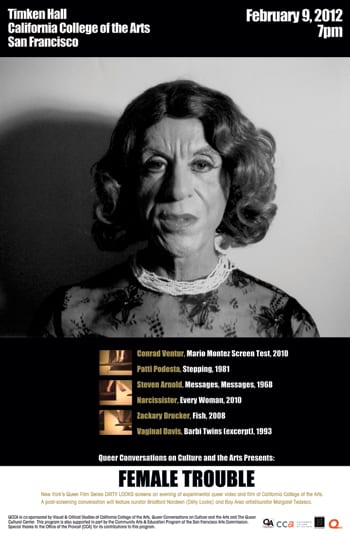 Queer Conversations on Culture and the Arts brings together locally and nationally renowned artists, writers, filmmakers, and scholars for a series of conversations to discuss a broad range of LGBTQI topics in the humanities and the arts.

With Mario Montez Screen Test, Conrad Ventur resubmits Jack Smith/Warhol Superstar Mario Montez to Warhol’s screen test format some 45 years later. Patti Podesta writes of her video Stepping, “I wanted to make something about risk, about repetition and a sort of lulling into nonsense of a very dangerous situation.” Steven Arnold won the Best New Director award at the Cannes Film Festival for his film Messages, Messages continuing in the tradition of Cocteau and Anger, following its singular protagonist through a psychosexual labyrinth of libidinal delights and genderfuck costumery.

With Mario Montez Screen Test, Conrad Ventur resubmits Jack Smith/Warhol Superstar Mario Montez to Warhol’s screen test format some 45 years later. Patti Podesta writes of her video Stepping, “I wanted to make something about risk, about repetition and a sort of lulling into nonsense of a very dangerous situation.” Steven Arnold won the Best New Director award at the Cannes Film Festival for his film Messages, Messages continuing in the tradition of Cocteau and Anger, following its singular protagonist through a psychosexual labyrinth of libidinal delights and genderfuck costumery.

Dirty Looks is a roaming series held on the last Wednesday of the month. Curated by Bradford Nordeen, Dirty Looks is a screening series designed to trace contemporary queer aesthetics through historical works, presenting quintessential GLBT film and video alongside up-and-coming artists and filmmakers. Filling a gap in the regular programming of Queer experimental work in the New York film community, Dirty Looks exhibits a lineage of queer tactics and visual styles for younger artists, casual viewers and seasoned avant-garde film-goers, alike. A salon of influences, Dirty Looks is an open platform for inquiry, discussion and debate.

“Deliver us from Daddy! Dirty Looks sets its sights on artist film and video that pierces dominant narratives, wanders with deviant eyes or captures the counter in salacious glares.”

STEVEN ARNOLD was an artist, photographer, filmmaker, muse and model of Salvador Dalí’s, and the center of a Los Angeles circle reminiscent of Warhol’s Factory. His films provide a bridge between the early cross-gender experiments of Claude Cahun and Pierre Molinier and what Gene Youngblood termed the “polymorphous subterranean world of unisexual transvestism,” which he saw as a hallmark of the emerging “synesthetic cinema” of the 1960s. The screening also pays homage to an innovative—yet often overlooked—poet of the Beat Generation, Ruth Weiss, who stars in all the films.

VAGINAL DAVIS was born and raised in Los Angeles, but now lives in Berlin. She is an accomplished experimental filmmaker, visual artist and writer, who Hilton Als of The New Yorker has called “the poet laureate of Santa Monica Blvd.” She has curated programs for many film festivals including Berlin and Sundance. She teaches performance at Lund University’s Malmö Art Academy (Sweden). She is also the subject of academic elucidation by Jose Muñoz in Disidentifications: Queers of Color and the Performance of Politics and Jennifer Doyle in Sex Objects: Art and the Dialectics of Desire.

ZACKARY DRUCKER is a limp-wristed, switch queen/Los Angeles-based artist. Infusing elements of installation, performance, text, photography, and video, Drucker’s work explores under-recognized aspects of queer history while simultaneously inscribing her own experience and position within it. Drucker reactivates Bruce Rodgers’ The Queens’ Vernacular , documents relationships and secret legacies, and challenges conventions of entertainment and drag performance, as well as existing art-historical representations of queer people. Oscillating between documentary, mythology, and personal narrative, the work is an overall novel exploration of gender as it is constructed, deconstructed, and experienced.

NARCISSISTER is a Brooklyn-based artist and performer.  Her formative training took place at the Alvin Ailey American Dance Center. In addition to performance work, Narcissister does collage, sculpture, video art, and photography. Her studio residencies include The Whitney Museum IS Program, The Woodstock Center for Photography AIR Program, and the Art in General Eastern European Residency Program. Narcissister has also worked extensively as a commercial artist, designing window displays and working as a stylist and art director.

PATTI PODESTA‘s career is a continuing investigation of the intersection of art and film. Together with artist Bruce Yonemoto, Ms. Podesta co-founded the video program at Los Angeles Contemporary Exhibitions (LACE). In the early 90s, she began designing feature films and this has become the focus of her career, the synthesis of her interest in the sculptural and the temporal, in architecture and in color. She has designed for the original and acclaimed film “Memento,” the HBO film “Recount,” “Smart People,” and “Bobby.” Ms. Podesta’s work in film and video has been screened throughout the United States and Europe including the Museum of Modern Art, the Rotterdam Film Festival, the American Film Institute National Video Festival, the Pacific Film Archives and recently at LACMA and the UCLA Hammer Museum. Her work was included in the Getty Museum’s historic “California Video” exhibition and catalogue. Born in Los Angeles, Podesta received a B.A. from Pitzer College and an M.F.A. from Claremont Graduate School.

About the screening hosts:

BRADFORD NORDEEN was born in St. Louis, Missouri. He holds an MA in Cinema Cultures from King’s College London and a BFA in Photography and Media from CalArts. Nordeen has organized screenings internationally. His writing has been published in Art in America, the Fanzine, X-TRA Contemporary Art Quarterly, Slant Magazine, and Butt Magazine amongst others. He lives in Brooklyn, NY.

Artist and curator MARGARET TEDESCO has presented and collaborated with visual and performance artists, writers, and filmmakers since the ’80s. Her work has been shown internationally. In 2007 Tedesco founded [/fusion_builder_column]

QCCA is co-sponsored by Visual & Critical Studies at the California College of the Arts, Queer Conversations on Culture and the Arts and The Queer Cultural Center. This program is also supported in part by the Community Arts & Education Program of the San Francisco Arts Commission.

Special thanks to the Office of the Provost (CCA) for its contribution to this program.