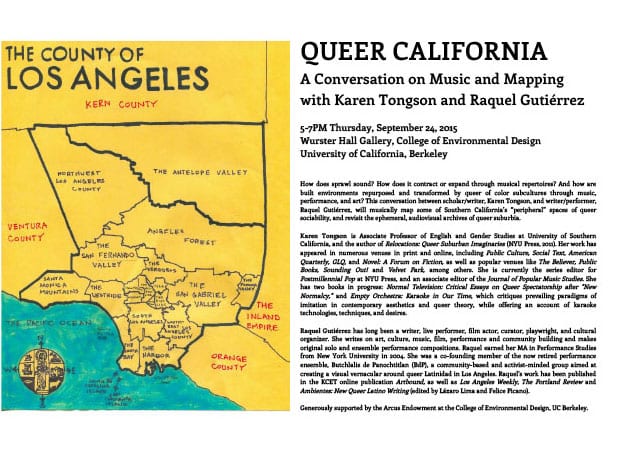 5-7 PM Thursday, September 24, 2015
Wurster Hall Gallery, College of Environmental Design
University of California, BerkeleyHow does sprawl sound? How does it contract or expand through musical repertoires? And how are built environments repurposed and transformed by queer of color subcultures through music, performance, and art? This conversation between scholar/writer, Karen Tongson, and writer/performer, Raquel Gutierrez, will musically map some of Southern California’s “peripheral” spaces of queer sociability, and revisit the ephemeral, audiovisual archives of queer suburbia.

Karen Tongson is Associate Professor of English and Gender Studies at University of Southern California, and the author of Rlocations: Queer Suburban Imaginaries (NYU Press, 2011). Her work has appeared in numerous venues in print and online, including Public Culture, Social Text, American Quarterly, GLQ, and Novel: A Forum on Fiction, as well as popular venues like The Believer, Public Books, Sounding Out! and Velvet Park, among others. She is currently the series editor for Postmillennial Pop at NYU Press, and an associate editor of the Journal of Popular Music Studies. She has two books in progress: Normal Television: Critical Essays on Queer Spectatorship after “New Normalcy,” and Empty Orchestra: Karaoke in Our Time, which critiques prevailing paradigms of imitation in contemporary aesthetics and queer theory, while offering an account of karaoke technologies, techniques, and desires.

Raquel Gutiérrez has long been a writer, live performer, film actor, curator, playwright, and cultural organizer. She writes on art, culture, music, film, performance and community building and makes original solo and ensemble performance compositions. Raquel earned her MA in Performance Studies from New York University in 2004. She was a co-founding member of the now retired performance ensemble, Butchlalis de Panochtitlan (BdP), a community-based and activist-minded group aimed at creating a visual vernacular around queer Latinidad in Los Angeles. Raquel’s work has been published in the KCET online publication Artbound, as well as Los Angeles Weekly, The Portland Review and Ambientes: New Queer Latino Writing (edited by Lázaro Lima and Felice Picano).Generously supported by the Arcus Endowment at the College of Environmental Design, UC Berkeley.

This event is presented by: U.C. Berkeley College of Environmental Design, the Arcus Endowment, California College of the Arts and Queer Conversations on Culture and the Arts