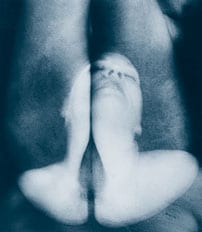 Debuting in the United States as part of the National Queer Arts Festival 2001, Lesbian ConneXion/s is a traveling photo exhibit that captures the variety of lifestyles, options, meanings, and visions that exist in lesbian circles. By presenting images created by Western, Eastern, and Southern European artists, the exhibition moves from the artist’s individual cultural reference points to an exploration of lesbian diversity. In 1995, photographers Marian Bakker and Traude Buhrmann invited photographers all over Europe to submit work on any subject as long as there was a lesbian connection. The result is this traveling exhibition of images created by 60 photographers from 15 countries.