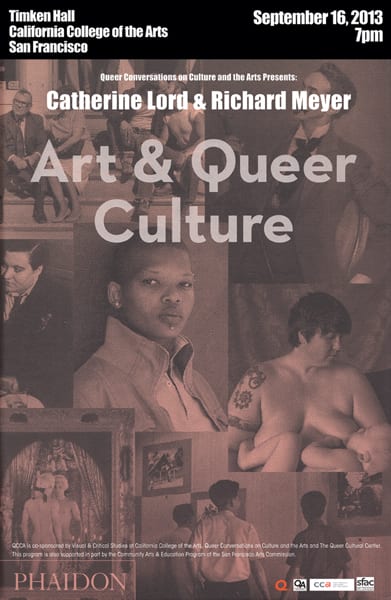 Queer Conversations on Culture and the Arts (QCCA) Presents:
“The Making of Art and Culture: a Conversation between Catherine Lord and Richard Meyer”

Spanning 125 years, Art and Queer Culture is the first major historical survey to consider the ways in which the codes and cultures of homosexuality have provided a creative resource for visual artists. Attempts to trouble the conventions of gender and sexuality, to highlight the performative aspects of identity and to oppose the tyranny of the normal are all woven into the historical fabric of homosexuality and its representation. From Oscar Wilde to Ryan Trecartin, from the molly houses of eighteenth-century London to the Harlem drag balls of the 1920s, the flamboyant refusal of social and sexual norms has fuelled the creation of queer art and life throughout the modern period.

Although the book proceeds in a chronological fashion, it does not propose a progressive narrative in which homosexuals become increasingly adept at negotiating the circumstances of censorship and overcoming the terms of stigma and invisibility. The dialogue between art and queer culture does not move towards ever more affirmative images of equality and dignity. Rather than countering homophobia with ‘positive’ images of assimilation, many of the artists and photographers featured in this book draw upon, and even draw out, the deviant force of homosexuality.

Art and Queer Culture includes not only pictures made and displayed under the rubric of fine art but also those intended for private, underground or otherwise restricted audiences. Scrapbooks, amateur artworks, cartoons, bar murals, anonymous photographs, activist posters – all appear in its pages, as do paintings, sculptures, art photographs and video installations. Writing queer culture into the history of art means redrawing the boundaries of what counts as art as well as what counts as history. It means searching for cracks in the partition that separates ‘high’ art from ‘low’ culture and in the divide between public achievement and private life.

BIOS
Catherine Lord is a professor of studio art, writer, artist and curator who has received numerous fellowships and awards for her work on cultural politics, disability, queer identities, feminism and colonialism. Her books include The Summer of Her Baldness: A Cancer Improvisation (2004) and Son Colibri, Sa Calvitie: Miss Translation (2007).

Richard Meyer is the Robert and Ruth Halperin Professor in Art History at Stanford University. He is the author of Outlaw Representation: Censorship and Homosexuality in Twentieth-Century American Art (2002), and his studies in modern and contemporary art focus on the ongoing debate over sexuality and gender, its effects on modern art and visual culture, and censorship and the public sphere.