Marga Gomez performs her show, Higher Highs, Lower Lows and Felice Shays showcases PsychoSemitic. This is a double-billed show each evening. Marga Gomez’ show is cosponsored with QueLACo and the Queer Latina/o Arts Festival. Felice Shays’ show will also be presented in ASL. 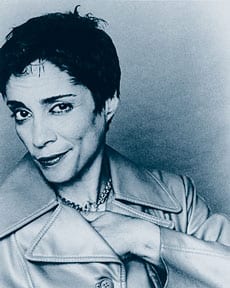 Marga Gomez
Higher Highs, Lower Lows
Marga Gomez is recognized as a national lesbian treasure for her fifteen years as an openly gay, fierce, funny, and foxy comedian. She has been featured on HBO’s Comic Relief and Comedy Central’s Out There. With devastating one-liners, fabulous characterizations, political satire, and a pinch of smut, Marga aims her comedy at everyone regardless of ethnicity, sexual orientation, or hairstyle.

The LA Times declared her “Hilarious.” The New York Times hailed her as “incendiary as a Molotov cocktail.” The San Diego Union raved that Marga’s stand up “had the passion for justice that makes even her most personal works resonate” and she “performs with a biting wit and political edge that marks her as a revolutionary.”

In addition to her stand up work Marga is also the writer/performer of four theater solos: A Line Around the Block, Memory Tricks, Jaywalker, and Marga Gomez is pretty, witty and gay. She has been presented Off Broadway, nationally and internationally, including two productions in Chicago sponsored by the Chicago International Theater Festival and the Latino Cultural Center.

Science Fiction fans were awed by Marga’s underwater muffin making prowess in Barry Levinson’s Sphere. She was also seen in Batman Forever (briefly), and guest starred with Tracey Ullman in Tracey Takes On… Marga’s work has been published in several anthologies including Extreme Exposure (TCG Books), Out, Loud & Laughing (Anchor Books), Contemporary Plays by American Women of Color (Routledge), and Out of Character (Bantam Books). 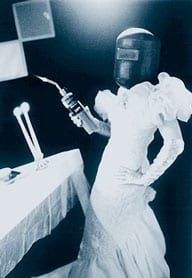 Don’t mess with a Jewish dyke and her blowtorch—especially if she’s hungry—or has been spurned. PsychoSemitic is a disturbing, comedic display of physical and emotional endurance. Performer/writer Felice Shays hangs from the ceiling, wailing, and accompanied by performer Saira and by the drone of household appliances as she asks the questions that have plagued Jews throughout the centuries: According to Jewish Dietary Law, is a dildo meat or dairy? What if it has been circumcised? What happens when you discover that your lover of three years is a mannequin? Blasphemous sex, novel interpretations of Jewish Law, (self) forced-feedings, the dynamics of queer love and loss, pyrotechnics, the permeable line between pain and pleasure, illicitly procured slides … a little something for everyone—you shouldn’t go hungry.

Felice Shays
Formerly a singer in the Boston-based performance group Adult Children Of Heterosexuals, Felice Shays has been performing in and around New York, both on stage and in film, for the past several years. She was most recently featured in Susana Cook’s Gross National Product at The Kitchen and in Shays’ one-woman shows Felice Brutality, Jew Hungry? and The Temporary Flesh performed at Dixon Place, The WOW Cafe Theatre, Gowanis Arts Exchange, Lesbopalooza, The Chelsea Playhouse, and in Boston as part of the Out On The Edge Festival. Felice can also be found interpreting for deaf people, teaching about sexual health and pleasure, and selling sex toys.