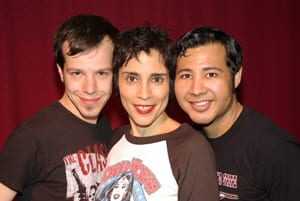 After last year’s sold-out hit, Marga Gomez (GLAAD award winner, LOGO network) returns to NQAF bringing with her the sharpest queer dude stand -up comics in America: Ali Mafi, Ronn Vigh and Thai Rivera, for an unforgettable comedy experience. Not for the easily offended, this diverse and talented line-up will tackle race, drugs, politics, sex and more sex. Marga, who started out in San Francisco’s legendary queer comedy club The Valencia Rose, wanted to present three queer comedians who are making it in the mainstream comedy scene. Ali Mafi, gay and Muslim, was featured in the  national “Axis of Evil” tour. Ronn Vigh was featured in “Last Comic Standing” and headlines national LGBT events. Road warrior Thai Rivera is winning audiences all over the country from LA’s Improv and Laugh Factory to redneck bars in the heartland. One night only!

MARGA GOMEZ is one of America’s first openly lesbian comedians. She has performed her fierce, smart and high-energy comedy at universities, festivals and clubs all over the United States.

Marga is a 2006 Drama Desk Nominee and won the GLAAD award in 2004. She has been featured on HBO, VH-1, Comedy Central, Showtime, was seen most recently on Logo Network’s comedy series “Wisecrack,” and in the documentary “Laughing Matters.”

Marga is also the critically acclaimed author/performer of seven solo plays, which have been produced nationally, internationally and Off-Broadway. www.myspace.com/margagomezcomedy

RONN VIGH is a popular Bay Area comedian who has headlined national LGBT events. The SF Weekly compared Ronn’s hyper, quirky, and brash style to a young Joan Rivers (if she was male, gay, and didn’t shoot Botox).  Ronn was featured on Last Comic Standing and also appeared in the Off Broadway Hit “10 Naked Men.” www.myspace.com/98poundsoffury

ALI MAFI is hilarious, gay, Muslim, and an Iranian president’s worst nightmare.  The Bay Area Reporter described Mafi as “a true revelation.”  Since opening for Marga on New Year’s Eve Ali has been rising quickly in the ranks of Bay Area comedians. This year he opened for Hal Sparks at Cobb’s Comedy Club and headlined at the SF Comedy College. www.myspace.com/alimafi

THAI RIVERA is an up and coming LA based comedian often featured at The Improv and Laugh Factory. Thai’s uncompromising style and bold material have gained him respect among his peers. When he’s not touring around the country playing colleges and clubs, he coaches new comics. www.myspace.com/thairivera