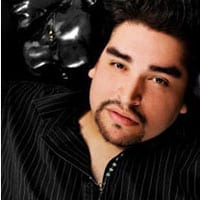 Come and check out some of our mujeres and hombres poets/ writers bringing out their outmost and most intimate queer experiences to spoken word.

Dino Foxx, born and raised in San Antonio, is part of the Tragic Bitches project which premiered at the La Peña Cultural Center in Berkeley, California in May of 2007 and has since toured through the west coast. This theatrical poetry collaboration, which features Poet/Performers Adelina Anthony, Dino Foxx and Lorenzo Herrera y Lozano, will be making its South Tejas debut in March of 2008 at the historic Victory Grill in Austin.
His poetry, which follows “themes of family unity and disunity, ethnic bonds and divisions, assimilation and displacement as well as sexuality and love” (Andres Duque of Blabbeando), has been published in such collections as the 19th issue of Suspect Thoughts: A journal of subversive writing (2007) and the radical Queer People of Color Anthology, Queer Codex: Chile Love in association with Evelyn Street Press & ALLGO.

Dino is also in the process of publishing his first collection of poetry with Xorizote Press (2008).