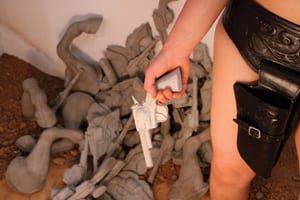 A sculptural installation comprised of multiple cement replicas of iconic personal objects. The at-times identity-synonymous objects evoke the growing pains within the intersection of working-class Chicano culture and a gender-queer adolescence. Accompanied by a bilingual narrative, the show results in a tangle of memories, devotion, life-long contradictions, and the constant effort to sustain a balance and redefine cultural tradition and identity.

Jillian Soto received her BA from San Francisco State University. She produces multi-media installations addressing the junction of gender identity and Chicano culture as well as the battle over Mexican immigration. She believes borders should be crossed both literally and figuratively. Soto lives and works in San Francisco.