borderOUT is a collaborative of Bay Area based queer immigrant artists.

Tru Bloo is a first-generation Arab-Armenian Oakland-based emcee, artist, community organizer, poet, musician, and public interest attorney who has performed in Hip-Hop shows around the Bay Area and at events nationwide, including Incite! Color of Violence 2005 in New Orleans, UCSC Women of Color Film Festival 2005, AMWAJ (Arab Movement of Women Arising for Justice 2006 in Chicago, and Women in Hip-Hop 2007 in SF. Contact her at www.myspace.com/trubloo5 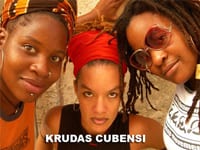 Maria Machetes, one of the funders of borderOut collavorative, began  singing ranchera at age four in her home town of Uruapan Michoacan, Mexico. She performed in regional cultural festivals, and peñas (art cafes) in Uruapan as well as Morelia. In the Bay Area, she has performed in the National Queer Arts Festival, Quelaco, MAPP, International Women’s Day celebration at Plaza 16, Amor Sin Fronteras, Noches Bohemias and Galeria de la Raza. Maria has worked with immigrant youth and their families, organizing community arts events, and facilitating workshops about prevention of sexual violence with a number of community organizations in the Bay Area.

Zuleikha Mahmood is a queer mixed Afghan American writer. In 2008, she toured with Mangos with Chili, a queer and trans people of color performing arts cabaret. She’s performed widely in the Bay Area, and has work forthcoming in Kohl, an anthology of Afghan American Women’s Fiction. Zuleikha is proud to be a co-founder of the Femme Sharks, and is currently at work on a novel. 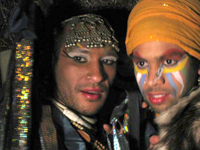 Gaston Mazó is an Argentinian dancer, choreographer, and circus performer. He started his career at the age of 6 in Buenos Aires. Trained in Argentinian folk dance, fitness and personal training, he performed as part of many companies in Argentina. He was a dancer, backup singer, circus performer and percussionist in “La Malamaña” Art Group, a San Francisco performing troupe for two years. Currently, he is performing with local bands such as Rupa & the April Fishes, LoCura, Antioquia, experimenting with the magic of Flamenco dancing.

Adriana Sanchez Nieto was born in Bogota, Colombia. She has a B.A. in Dance, Music, Arts and Theater from CENDA University of Bogota. She is Choreographer, performer and actress. She has been teacher and choreographer at colleges, community centers and business companies for 22 years. She studied ballet, jazz, modern, contemporary, tap, and flamenco.  She studied Colombian folklore at Academy Superior of Dance in Bogota with Jacinto Jaramillo, Nicolas Murillo and Guillermo Abadia Morales. She studied theatre at Academy Superior of Theatre and El Teatro Libre de Bogotá. In 2004 Adriana traveled to New York to study dance. Living there she formed the dance company Colombian Soul out of a necessity to express and to share who she is, where she comes from, and what she lived each day in Colombia. Through Colombian folkloric dance and short pieces of theatre Adriana explores idiosyncrasies, dreams and traditions of Colombia. Colombian Soul has performed throughout the Bay Area in different festivals such as San Francisco Carnaval, Festival Chileno, BorderOut Performance Show, Fresh Meat Productions’ Transgender & Queer Performance Festival, Diáspora Negra, QUEC Festival at San Francisco State University, Immigration Nation, 26th Encuentro Del Canto Popular, Festival de los Rehiletes Musicales Colombian Soul Kids.

Rosa Los Santos came to Oakland in 2001 from her birthplace in Lima, Peru and has been singing Latin and especially Afro-Peruvian music professionally for 15 years.  She performs regularly with Peruvian groups ‘De Rompe y Raja’, and ‘Nostalgia’.  Rosa sings a wide repertoire of Latin music, plays guitar and cajon –a percussion instrument of Afro-Peruvian origin.  She is also an accomplished performer of the Afro-Peruvian competitive dance form zapateo. Rosa has performed at Bay Area venues such as La Pena Cultural Center, La Furia Chalaca, ODC Theater, Julia Morgan Theater, Stanford University and UCSF.  She also has captivated audiences in Massachusetts, Utah, and at the Michigan Women’s Music Festival.

Trilce Santana, one of the founders of borderOut, was born in Argentina and after some back and forth, finally stayed in the U.S. at age nine. She began playing music when she was 11 as part of Sukutai Marimba Ensemble in Seattle and continues to explore her main love, percussion. Trilce has worked as a fundraiser and event coordinator for a number of Bay Area non-profits serving the LGBT community, immigrant youth, as well as organizing community arts events. She currently works at LYRIC.

Ming Wong is a writer, performer, graphic designer, attorney and chef. He grew up in Malaysia and Singapore, where he did very well on exams still controlled by the British while admiring plays and poems written by Americans. As a Buddhist, he believes that life is fabulous in all senses of the word. He currently works as Helpline Attorney at the National Center for Lesbian Rights.

Co-sponsored by NCLR and El Rio