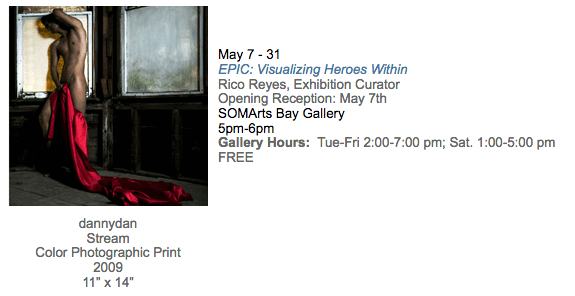 Visual artists – working in different media and style, addressing a vast range of issues and themes, identifying with multiple hyphens, slashes, and qualifiers – converge in one gallery to launch EPIC: Visualizing Heroes Within. This visual art exhibition, presented under the auspices of the Gay Asian Pacific Alliance (GAPA), is being held at the SOMArts Cultural Center Bay Gallery in association with Asian Pacific Islander Cultural Center as part of the 12th Anniversary United States of Asian America (USAA) Festival and with Queer Cultural Center as part of the 12th Annual National Queer Arts Festival. GAPA has been instrumental in organizing exhibitions that poignantly address issues of identity within the Gay Asian community. This year’s exhibition, EPIC: Visualizing Heroes Within engages this identity within the frame of the image economy, the politics of difference, and the expression of an imagined nation.

This exhibition brings forth lofty ideas of how identity is expressed and negotiated as strategies on how we as a community can access our total selves through visualizing heroes within each of us. Our daily lives become examples of heroic deeds, recounted, retrospectively and in totality, it emerges as an epic. EPIC: Visualizing Heroes Within is an act of self-determination; it is an act of resistance; it is a negation of a negation; it is a dynamic, multivalent reflection on Queer Asian Pacific American viewpoints, identities, imagination, and desires.