Dorsey has been awarded two Isadora Duncan Dance Awards and the Goldie Award for Performance. He was recently named Best Dance Troupe in the SF Weekly’s ‘Best of San Francisco.’   Dorsey has been named in the Top Ten in Bay Area Dance by both the San Francisco Bay Guardian and the Bay Area Reporter, and was named by Europe’s leading dance magazine (BalletTanz) as one of the international dance scene’s most promising choreographers. Dorsey recently choreographed a music video for Antony and the Johnsons directed by the Wachowski Brothers (The Matrix, V is for Vendetta) and is also the subject of a PBS/KQED Spark episode.

Dorsey has received commissions from the San Francisco Arts Commission, the National Queer Arts Festival and Highways Performance Space (supported by the Irvine Foundation).  He recently premiered his acclaimed concert ‘Uncovered: The Diary Project,’ supported by a prestigious commissions from the Gerbode Foundation and San Francisco Arts Commission.  Dorsey’s work has been presented extensively in the Bay Area and on tour throughout the US and Canada.

Zoe Balfour and Citabria Phillips come to the Festival fresh from winning the North American same-sex ballroom championship and California State Championships for the 4th year. They have been dancing and competing together at home and abroad since 2003.  They are also Gay-Games medalists and will be competing for Gold at the next OutGames in Copenhagen, Denmark in 2009.  They share their passion for dance with the same-sex community through Dancing with the Queers, a weekly series of Ballroom and Latin dance classes held at the Lake Merritt Dance Center in Oakland. Balfour and Phillips also coach couples to compete nationally and internationally.

Zoe grew up in Wales and has danced all her life, starting early with Scottish Sword dancing to the music of Bagpipes.  She hosts Trip the Light Fantastic, a bi-monthly same-sex partner dancing event teaches weekly same sex classes in a variety of dance styles both social and ballroom and gives private lessons.

Citabria began her dancing career with country western two step. She then fell in love first with Lindy Hop and subsequently ballroom dancing.  She now teaches both private lessons and group classes in a variety of styles, including a recently launched absolute beginners American Style class at Just Dance Ballroom in Oakland.
www.dancingwiththequeers.com

The Barbary Coast Cloggers are an all-male dance company founded in San Francisco to bring the rowdiness and unique spirit of North America’s indigenous dance form, called clogging or American step dancing, out of the Appalachian Mountains all the way to the West Coast. Performing since 1981, the company’s innovative performance style is an exciting synergy of traditional American dance imbued with originality, flare, and a certain creativity that is characteristically Californian.  The Barbary Coast Cloggers have toured across the United States and Canada, including performances in New Orleans, Vancouver, Nashville, San Diego, Oregon, Nevada and extensively throughout California. The company has opened for bluegrass legends Earl Scruggs, Ricky Skaggs and country western superstars Brooks & Dunn, and performed with Nancy Sinatra at the Herbst Theater. BBC has been awarded an Isadora Duncan Dance Excellence Award (Izzie) for best ensemble performance. www.barbarycoast.org

Ryka Aoki de la Cruz is a trans Goth dyke writer, composer, chemist, black belt who has recently featured at the National Queer Arts Festival, the National Gay and Lesbian Theatre Festival, Ladyfest South 2007, Atlanta Pride, UCLA’s OutCRY, and Fresh Meat. In 2005, Ryka was the inaugural performer for San Francisco Pride’s first ever Transgender Stage. She has also worked with the American Association of Hiroshima-Nagasaki A-Bomb Survivors, and two of her compositions have been adopted by the group as its official “Songs of Peace.” Ryka has an MFA in Creative Writing from Cornell University, is a founder of Cornell University’s Asian American Playhouse, and is the recipient of a University Award from the Academy of American Poet. Ryka has been honored by the California State Senate for her work with Trans/Giving, LA’s only art/performance series dedicated to trans, genderqueer, and intersex artists. She was formerly head judo coach at UCLA and Cornell University, and is a professor of English at Santa Monica College.  www.myspace.com/rykaaokidelacruz

Deadlee: L.A.-based gay rapper, Deadlee’s no-homo-left-behind philosophy has sent shock waves through the homophobic hip-hop scene. Deadlee doesn’t claim to be anything but himself—a hard mc, spitting rhymes of a grander truth and by doing so has taking his rightful place in the hip-hop scene. Said Gay.com’s Josh Tager: “Like many of his rap peers, Deadlee’s albums are intense, writhing outbursts of anger. The notable distinction here is that when Deadlee bashes, he’s bashing back.”  Deadlee has performed at the Peace Out Festival (Homohop) in Oakland, Peace Out East in NYC, HomoAGoGo in Olympia Washington, Los Angeles Latin Gay Pride festival, Toronto Pride in Canada, the San Francisco GLBT Pride Main Stage and Outfest’s FUSION Festival. Deadlee has provided music for a variety of motion pictures including On the Downlow and Vengeance. He was also featured in the landmark documentary film on gays in hip hop called Pick up the Mic. Deadlee was featured in a LOGO reality show called Hip Hop Homos and the video for his Good Soldier II song is played on both of LOGO’s music shows (New Now Next and The Click List). Deadlee has two CD’s: 7 Deadlee Sins and Assault with a Deadlee Weapon.  Deadlee has performed in several movies including Vengeance and Dead Men Walking and recently completed his first starring role as Lazy in the film Hoochie Momma Drama.  http://www.myspace.com/deadleeofficial

D’Lo: Described as a “jolt of creative and comedic energy”, D’Lo is a Tamil Sri L.A.nkan-American, political theatre artist/writer and music producer. D’Lo also performs and facilitates performance workshops extensively throughout the US, Canada, UK, Germany, Sri Lanka and India.  D’Lo’s career work has included being part of several performance groups (Artwallah, Great Leap, Arpana Dance Company, Mujeres de Maiz, Cornerstone Theater Company); working closely with diverse youth as a teaching artist; establishing D’Lo as both a solo and collaborative performer and being published in various magazines and anthologies.  D’Lo holds a BA from UCLA in Ethnomusicology and is a graduate of New York’s School of Audio Engineering (SAE). In 2004, D’Lo had a sold-out NYC run of D’s first play “Ballin With My Bois” a queer hip-hop theater piece. Currently, D’Lo is touring with “Ramble-Ations: A One D’Lo Show” which received the NPN Creation Fund Grant. D’Lo has also been recently published in “Desi Rap: Hip Hop and South Asian America”. www.dlocokid.com 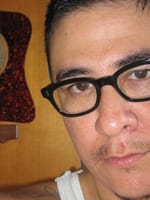 Storm Miguel Florez: Originally from Albuquerque, New Mexico, Storm Miguel Florez is a Mexican aMaricon singer/songwriter, QueErotic performance artist, and live tranny sex show producer. Sometimes he does these things all at once. As a co-creator of Trans as F*ck and occasional leader of queer ritual, he is learning how to integrate trans and POC activism with sexiness and connection to Mama Earth.

Trans as F*ck received a Queer Cultural Center grant to show at the 2008 National Queer Arts Festival and has also featured in West Hollywood. StormMiguel has also featured at the National Queer Arts Festival: Intercourse (2001), Viva La Joteria (2004), Home Queer Home and Transforming Community (2007).  He was honoured to have his music featured in Sean Dorsey’s Uncovered: The Diary Project in January 2009. Storm’s writing has been published in BANG magazine (out of Stockholm, Sweden), From the Inside Out: Radical Gender Transformation, FTM and Beyond (Manic D Press) and his own self published The Pussyboy Chronicles (Sticky Press).  www.stormflorez.com 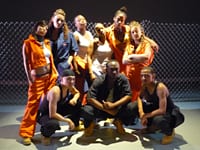 Mind Over Matter (M.O.M.) is the bay area’s elite hip hop dance group known for its clean execution and soulful style that encourages individualism amongst its members, but presents uniformity through the art of dancing. Every member brings a hardworking attitude, style, and presence –leaving audiences yearning for more.

Originated in 1993, M.O.M. has evolved into a diverse troupe that consists of members from teens to adults, with different ethnic backgrounds and a variety of dance styles. M.O.M. has an incomparable style– with the ability to merge styles ranging from ghetto, sultry, and sophisticated to the uncharacteristic. M.O.M.’s unique choreography and polished stage presence are what sets them apart from others. This strong combination brings forth a surge of excitement and motivation never seen before. M.O.M.’s style undoubtedly reflects the roots of its origins – evoking the passion, art and life of San Francisco’s Mission District, particularly the Latin and Afro-centric vibes that can be felt along these streets. Audiences will agree that M.O.M. is an unparalleled group of dancers who pride themselves on their creativity, energy and commitment to dance and to each other.  www.myspace.com/mindovermattersf

Taiko Ren: We are Taiko Ren: “taiko” for the Japanese style of drumming, combining dynamic movement and percussion; and “ren” meaning a close-knit collaborative group.  Taiko Ren has been drumming collectively since the year 2000.  We come together with training and performance experience with San Francisco Taiko Dojo and other organizations.  We bring our performances to varied venues including stage productions, festivals, community and school events, corporate shows and private events.  Together, we explore and create a positive, expressive style of music, bring this powerful art form to diverse audiences, and play for the sheer joy of drumming. Contact us at taikoren@hotmail.com and visit our website at www.taikoren.com.  Let’s play!

Shawna Virago is celebrated as a trans pioneer in music, filmmaking and activism.  Miss Virago is a roots/rock songwriter whose music twists together punk roots rock and insurgent country, creating anthems for a new generation. Bucking the bigotry of mainstream music, Virago’s lyrics dig deep at police brutality, the economic marginalization of transgender people and life lived on the sweet continuum of being trans.  She was called the “sex symbol laureate of the West Coast transgender music scene,” in Eros magazine and a “transgender activist to watch out for,” in Curve magazine. The San Francisco Bay Times said, “If Keith Richards was a tranny that got together with Merle Haggard,” Virago would be “their love child.”  Virago is also the Director of Tranny Fest, the nation’s first transgender film and video festival. Miss Virago is one part poetess, one part ice queen and one part honky-tonk glamour girl.

Virago is currently completing her new album, Objectified.  Miss Virago is appearing in the upcoming film Diagnosing Difference, directed by Annalise Ophelian; her latest fiction is included in the new trans and gender-variant anthology, Gendered Hearts, edited by Morty Diamond; and she appears in Femmes of Power: Exploding Queer Feminities, by Del laGrace Volcano and Ulrika Dahl. www.shawnavirago.com