What does it mean to grow up in San Francisco, to come out, to negotiate home, self, identity, family, loss, and love in a city widely perceived as a gay mecca?

Still Here presents new work by artists raised in San Francisco during the 80s and 90s and still living in the Bay Area that delves into these never-explored questions. With the AIDS crisis in the backdrop of their childhoods, they came of age during a period of both great visibility and simultaneous loss for what would become their queer community. With varied backgrounds in dance, writing, performance, and video, Still Here reveals hidden, but crucial voices.

We invite you to join us as we re-imagine, re-invent, and re-examine San Francisco’s (queer) history and the overall Queer/LGBTQI narrative around AIDS.

SPONSORS
Still Here is co-sponsored and funded in part by Galeria de la Raza and the Queer Cultural Center. Still Here is made possible thanks to the support received from Galeria de la Raza’s ReGen Fund, a capacity-building and small grants program serving Latino artists and providing them with grant writing and artistic program planning skills to write competitive proposals and to access government and foundation arts funding. The ReGen Fund is made possible with the support of the National Association for Latino Arts and Culture and the California Arts Council. 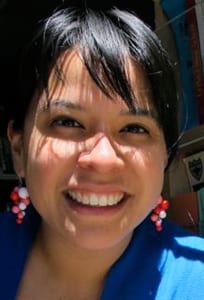 Cristina Mitra is happiest when dancing. A trained dancer since age 6, she has performed ballet, modern/contemporary, experimental, and cultural pieces at Smith College, Bates College Dance Festival, the American College Dance Festival at Boston University, Bindlestiff Theater’s Bakla Show, and most recently, in Aimee Suzara’s work-in-progress, A History of the Body. Multidisciplinary to the core, this mixed heritage Chicana/Pinay has also dabbled in video production as one of the earliest participants of QWOCMAP and as a film curator in Kearny Street Workshop’s APAture 2005.

Born at UCSF and raised in San Francisco’s Mission and Excelsior Districts, she is the 3rd generation of her Mexican-Filipino immigrant family to call this City home. A passionate advocate for youth, you can find her performing weekly in front of young audiences where she inspires imaginations through storytelling, singing, music, and movement as a children’s librarian in Bayview Hunters Point. She currently calls Bernal Heights home with her fiancée, artist and youth arts administrator, Aimee Espiritu. She is thrilled beyond belief to bring Still Here to life with her high school homie and comadre since age 14, Natalia Vigil. 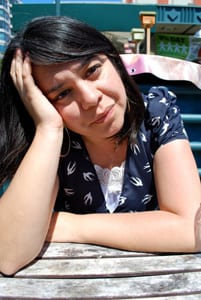 Natalia Vigil is the oldest of five sisters and a little brother, a proud Chicana born and raised in San Francisco, with stints in Hayward & Oakland. She is inspired by the resiliency and complexity of her loved ones and community and captures this in her multi-genre writing. She is a proud alumna of the Voices of Our Nations (VONA) Writing Workshop,  Intergenerational Writer’s Lab at Intersection for the Arts and Mills college, MFA. Her work has appeared in numerous shows around the Bay Area including  AMATE: Women Painting Stories Annual Reading, the National Queer Arts Festival,Know the Names of Things Anthology,Curbside Splendor and more. She loves collaborative projects, including her latest, Still Here and Activist Daughter. For the past two years she co-curated Gathering the Embers; a dia de los muertos Tribute Show at SOMArts with her sister, Amanda and is proud to be bringing Still Here to life with her high school bestie, Cristina Mitra. Though you may soon find her cozying up to the start of a novel, her writing career began in first grade when she wrote the poem, “You Make Me Glitter Up”, for her teacher, Mrs. Kahn. Photo of Natalia Vigil by T.Rain. 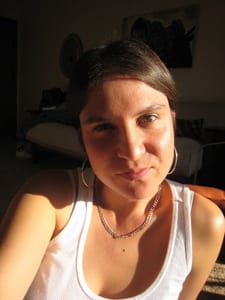 Tina Bartolome is a San Francisco native and daughter of immigrants from the Philippines and Switzerland. Her writing can be found in the current issue of Hyphen Magazine and in the anthology Walang Hiya: Literature Taking Risks Toward Liberatory Practice (Carayan Press).  In the past eight years, she is proud to have worked with Doveglion Press, Queer Women of Color Media Arts Project, Bindlestiff Studio, KulArts, Intersection for the Arts and Kearny Street Workshop. An Omar S. Castaneda Fellow, she received her M.F.A. in Creative Writing at Indiana University and her B.A. from San Francisco State University. Her solidarity with people’s struggles for self-determination has taken her to the Philippines, Cuba and Guåhan (Guam) and she currently serves as Program Director for SOUL School of Unity and Liberation in Oakland, California. She is equal parts dialectic materialist and astrologist, wall flower and dancehall queen. Visit her blog at tinabartolome.wordpress.com. 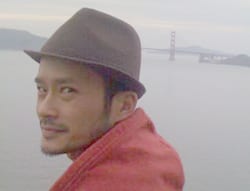 James Q. Chan is a San Francisco based filmmaker. Prior to relocating to the Bay Area in the mid-80’s with his immigrant father and brothers, his roots spread across China, Vietnam, Indonesia, and Minnesota. When he isn’t fueling his procrastinations with ramen, thrift stores, and Belgian ales, he collaborates on some pretty awesome projects such as The Bridge (Los Angeles Int’l Film Festival; Frameline LGBT Film Festival 2012);HOWL (Sundance Film Festival Opening Night 2010; National Board of Review’s Freedom of Expression Award);Right Down the Line (Bonnie Raitt’s official music video; Grammy Award Best Americana Album 2013). Individual and collective works have been shown at Intersection for the Arts, on PBS, The History Channel, on stage, and film festivals around the world.

James is a recipient of a 2013 ITVS/PBS development grant for his documentary directorial debut about local Bay Area artist Frank Wong and his Chinatown dioramas. He is proud to collaborate with Tina B., his sister from another mister, on Still Here for the National Queer Arts Festival (and life in general). 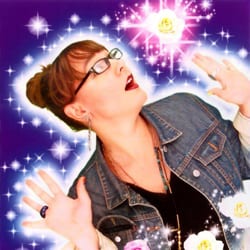 Cara Rose DeFabio is an interdisciplinary creative who believes her community is her greatest asset. She enjoys collaborating across fields and is comfortably wired to the local queer performance scene, ace journalists, foodies, twitterati, and homegrown heroes in her native San Francisco. She has been an Artist-in-Residence at Guapamacataro, Mexico, staged participatory theater at historical landmarks with We Players, and is a proud conspirator on Longshot Magazine. Her original work, She was a Computer, premiered at Counterpulse in San Francisco last summer. Currently she is working on After the Tone, a performance examining digital afterlife and how technology mediates mourning, which will debut at the SF Fringe Festival in September.  http://shewasacomputer.tumblr.com/ 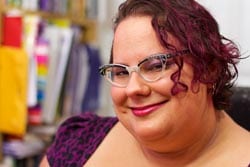 Gina de Vries is a genderqueer femme, a queer Paisano with working-class Catholic roots, a devout pervert, and a writer, performer, activist, and cultural worker living, writing, and loving in San Francisco. Ze is the founder and co-curator (with Elena Rose and Julia Serano) of “Girl Talk,” a critically acclaimed multi-media performance show promoting dialogue about relationships of all kinds between queer trans women, queer cis women, and genderqueer people. Gina has performed, taught, and lectured everywhere from chapels to leatherbar backrooms to the Ivy Leagues to community colleges. Her university appearances include Harvard, Yale, Reed, The Pacific School of Religion, UW-Madison, and Hampshire. She is the founder and facilitator of Sex Workers’ Writing Workshop, awriting class for current & former sex workers at San Francisco’s Center for Sex & Culture (where ze also serves on the Advisory Board).

Gina’s publications include That’s Revolting!, Bound to Struggle, Baby Remember My Name, The San Francisco Bay Guardian, $pread: illuminating the sex industry, Curve, Coming & Crying, Take Me There: Trans & Genderqueer Erotica, The Revolution Starts at Home, and Why Are Faggots So Afraid of Faggots. Ze is currently pursuing her Master of Fine Arts in Fiction Writing at San Francisco State University, where ze is at work on How To Have A Body, a book of experimental prose about, well, how to have a body. Gina grew up and came of age in San Francisco’s Ingleside/Lakeview District in the 90s. Her favorite things about the neighborhood as teenager were Beep’s Burgers and Mount Orizaba (or, the Lakeview-Ashton Mini-Park). Find out more atginadevries.com, and keep track of hir on the daily atqueershoulder.tumblr.com andhowtohaveabody.tumblr.com. 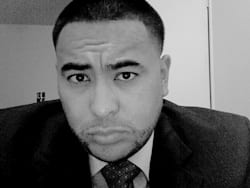 Born and raised in San Francisco’s Mission district, Danny Robles is the son of working class immigrant parents from El Salvador and the Philippines.  Danny graduated from the University of California Davis with a bachelor’s degree in English with a dual emphasis in creative writing and literary theory and minors in African and African American Studies and Chicana/o Studies.

Danny studied abroad in the Quarter Abroad Program with UC Davis in the city of Havana, Cuba.  In Cuba, he conducted research at the reknown Casa de Las Americas. There he studied Cuban literature, poetry and film, Spanish, Afro-Cuban religion, women in the Cuban Revolution, African diaspora in the Caribbean, transnational migration and constructions of Afro-Cuban race, sexuality and queer identity and the intersection of the changing political and economic landscape and the power of the internet as a catharsis for change.

While at UC Davis Danny also won first place in the Hemispheric Institute on the America’s photography contest in 2010 and interned with social justice projects such as the “Guantanamo Testimonials Project” with the Center for the Study of Human Rights in the Americas.  He also helped translate an exhibit into Spanish entitled “25 Stories From The Central Valley” with the Environmental Justice Project which was a photo-journalism exploration into the lives of the people in the Central Valley and the saturation of environmental pollution on their land.  Danny also created a movie short for Campus Movie Fest while at UC Davis entitled “Camencha’s Dream” and helped create an oral history video archive of the Chicana/o activists involved in the Chicano Civil Rights Movement in Sacramento.

In 2011 Danny was selected as an Americorps fellow for the Superior Court of California helping Spanish speaking litigants navigate the complex litigation process of how to properly complete their documents.  Prior to attending UC Davis, Danny was a flight attendant for a major airline. 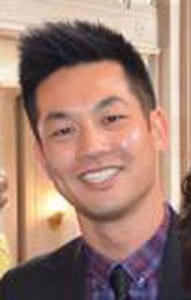 Bryant Tan is a proud San Franciscan born in General Hospital in 1980, raised in the Tenderloin through the 90s, and now lives and works within a mile from his childhood home. He is an occasional writer, photographer, and graphic designer. 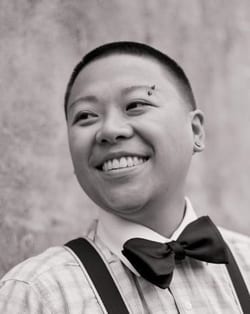 Born and raised in San Francisco to Pilipino immigrant parents of the “Brain Drain” generation, Tonilyn is a proud Pin@y booty shaking genderqueer love warrior dedicated to inspiring systemic social change through music, theater & filmmaking.  Her love of song began in the church choir in kindergarten. Since then, Toni has appeared in readings, plays, musicals and short films.  His music has been featured most recently at House of Music in Oakland, Dolores Park Cafe, Yerba Buena Center for the Arts and TransMarch SF.  Toni currently works with the Queer Women of Color Media Arts Project as the lead filmmaking workshop instructor and is an actor with Bindlestiff Studio, a Pilipino performing arts space and theater in San Francisco. 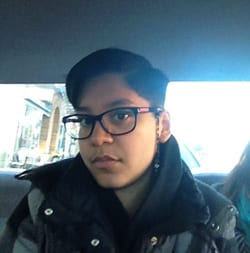 Amanda Vigil is a Xicana filmmaker, educator, performance/ installation artist from San Francisco CA (born & raised in the BAY BABY!!!) Amanda’s video/installation & performance work has been seen internationally and locally in San Francisco, Los Angeles and Berlin, Germany. She got her start as a video artist at the age of 17 with the  Young Artist At Work program (YBCA) and now holds a BFA in Film/Video from the California Institute of the arts (CALARTS). She was faculty in the Film/Video program at the California State Summer School of the Arts (Innerspark) for 5 years  and currently works For Justice Matters as a Media Strategist and as a Video Production Educator at the June Jordan School for Equity and Out of Site : where art inspires Action! programs & LOVES every minute of it!