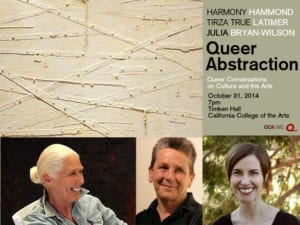 Queer Conversations on Culture and the Arts presents:
Queer Abstraction: Harmony Hammond and Tirza Latimer in conversation with Julia Bryan-Wilson

Video of the Conversation:
Part One 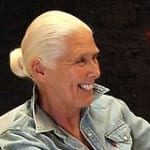 Harmony Hammond is one of today’s boldest abstract painters and an internationally renowned artist, whose work has been the focus of over 40 solo exhibitions. Her recent exhibition Becoming/UnBecoming Monochrome, curated by Tirza True Latimer, juxtaposes “weave paintings” from the mid-70’s with recent wrapped and grommetted monochromes thereby expanding the feminist frame within which the artist’s work is traditionally shown and critiqued. This comparison invites viewers to understand Hammond’s oeuvre in relation to histories of queer feminist practice as well as discourses of contemporary abstraction.

An artist, curator and scholar, Harmony Hammond has been at the forefront of the feminist art movement since the early 1970s – co-founding A.I.R., the first feminist cooperative gallery in Manhattan and Heresies: A Feminist Publication on Art & Politics. She continues to be a powerful advocate for lesbian and queer art, curating A Lesbian Show at 112 Greene St. in NYC (1978) and Out West at Plan B Evolving Arts in Santa Fe (1999). Her groundbreaking book Lesbian Art in America: A Contemporary History was published in 2000. In 2013 Hammond received the College Art Association Distinguished Feminist Award and in 2014 received the Distinguished Lifetime Achievement Award from The National Women’s Caucus for Art. Her artistic practice spans a variety of media including painting, sculpture, and conceptual works. Hammond is represented by Alexander Gray Associates in New York. 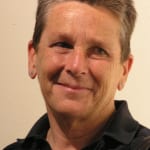 Tirza True Latimer has published work from a lesbian feminist perspective on a range of topics in the fields of visual culture, sexual culture, and criticism. She is coeditor, with Whitney Chadwick, of the anthology The Modern Woman Revisited: Paris Between the Wars (Rutgers University Press, 2003); the author of Women Together / Women Apart: Portraits of Lesbian Paris (Rutgers University Press, 2005); and coauthor of Seeing Gertrude Stein: Five Stories (University of California Press, 2011). The latter won a Stonewall Award, American Library Association, in the nonfiction category. Her new book, Eccentric Modernisms: Making Differences in the History of American Art is currently under review at UC Press.

Parallel to these pursuits, Latimer has been continuously active in the curatorial domain. Both students and faculty members from CCA have shown work in the exhibitions she has curated or co-curated at SomArts Cultural Center (Chronotopia, Threads, Making Room for Wonder) and the GLBT Historical Society (Lineage: Match-Making in the Archive). She was co-curator of a 2011 exhibition about the life and afterlife of Gertrude Stein, organized by the Contemporary Jewish Museum, San Francisco in partnership with the National Portrait Gallery, Washington, D.C. Her exhibition Becoming/UnBecoming Monochrome, featuring work by Harmony Hammond, recently opened at RedLine in Denver. 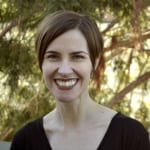 Julia Bryan-Wilson is associate professor at the University of California, Berkeley. She teaches modern and contemporary art, with a focus on art since 1960 in the US, Europe, and Latin America. Bryan-Wilson is the author of Art Workers: Radical Practice in the Vietnam War Era, published by the University of California Press in 2009, and editor of OCTOBER Files: Robert Morris, from the MIT Press. Her current book project is entitled Crisis Craft: Handmade Art and Activism since 1970.

Queer Conversations on Culture and the Arts

*Special thanks to the Office of the Provost, California College of the Arts.