Queer Conversations on Culture and the Arts: Trans/Queer Animacies
Oct. 23, 2019

Queer Conversations on Culture and the Arts brings together locally and nationally renowned artists, writers, filmmakers, and scholars for a series of conversations to discuss a broad range of LGBTQ+ topics in the humanities, architecture, design, and the arts. QCCA is an on-going collaboration between the Queer Cultural Center, California College of the Arts, and U.C. Berkeley’s College of Environmental Design. 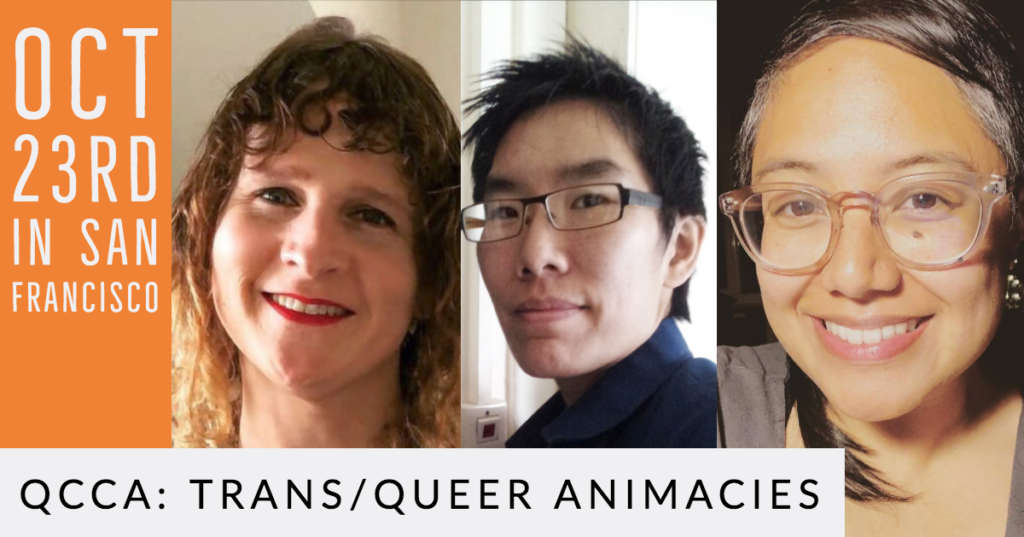 micha cárdenas, PhD, is Assistant Professor of Art & Design: Games + Playable Media at the University of California, Santa Cruz. cárdenas is writing a new algorithm for gender, race and technology. Her book in progress, Poetic Operations, proposes algorithmic analysis as a method for developing a trans of color poetics. cárdenas’s co-authored books The Transreal: Political Aesthetics of Crossing Realities (2012) and Trans Desire / Affective Cyborgs (2010) were published by Atropos Press. Her artwork has been described as “a seminal milestone for artistic engagement in VR” by the Spike art journal in Berlin. She is a first generation Colombian American.

Mel Y. Chen is Associate Professor of Gender & Women’s Studies and Director for the Center for the Study of Sexual Culture at U.C. Berkeley. In Spring 2020, they will be in residence as F.O. Mathiessen Visiting Professor of Gender and Sexuality at Harvard University, and in 2018-19 served as Robert Sterling Clark Visiting Professor at Williams College. Since their 2012 book, Animacies: Biopolitics, Racial Mattering, and Queer Affect, they have been working toward completing a book project concerning intoxication’s role in the interanimation of race and disability in histories and legacies of the transnational 19th century as well as in current schemes of securitization. Elsewhere, Chen has been thinking about and writing on slowness, agitation, gesture, inhumanisms, and cognitive disability and method. They co-edit the “Anima” book series at Duke, and are part of a small and sustaining queer-trans of color arts collective in the San Francisco Bay Area.

Dorothy R. Santos is a Filipina American writer and artist whose academic interests include digital art, computational media, games, and biotechnology. Born and raised in San Francisco, California, she holds Bachelor’s degrees in Philosophy and Psychology from the University of San Francisco and received her Master’s degree in Visual and Critical Studies at the California College of the Arts. She is currently a Ph.D. student in Film and Digital Media at the University of California, Santa Cruz as a Eugene V. Cota-Robles fellow. Her work has been exhibited at Ars Electronica, Fort Mason Center for Arts & Culture, Yerba Buena Center for the Arts, and the GLBT Historical Society.

Her writing appears in art21, Art Practical, Rhizome, Hyperallergic, Ars Technica, Vice Motherboard, and SF MOMA’s Open Space. Her essay “Materiality to Machines: Manufacturing the Organic and Hypotheses for Future Imaginings,” was published in The Routledge Companion to Biology in Art and Architecture. She is a co-founder of REFRESH, a politically-engaged art and curatorial collective, the program manager for the Processing Foundation, and host for the podcast PRNT SCRN produced by Art Practical.