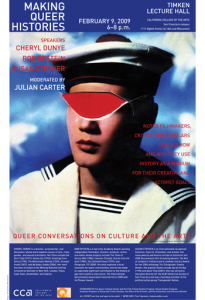 Making Queer Histories brings together noted filmmakers, critics, and scholars to discuss how and why they use history as a medium for their creative and activist goals.

Cheryl Dunye is a director, screenwriter, and filmmaker whose work explores issues of race, class, gender, and sexual orientation. Dunye’s films include She Don’t Fade (1991), Vanilla Sex (1992), Greetings from Africa (1994), The Watermelon Woman (1996), Stranger Inside (2000), and My Baby’s Daddy (2003). Her works have been included in the Whitney Biennial and screened at festivals in New York, London, Tokyo, Cape Town, Amsterdam and Sydney.

Rob Epstein is a two-time Academy Award–winning independent filmmaker, director, producer, writer and editor whose projects include The Times of Harvey Milk (1984), Common Threads: Stories from the Quilt (1989), The Celluloid Closet (1995) and Paragraph 175 (2000). His work has been widely screened and engages discourses around critical moments for queer communities throughout history. The International Documentary Association recently named him the 2008 Pioneer Award winner.

Susan Stryker is an internationally recognized independent scholar of sexuality and gender. She is author of Gay by the Bay: A History of Queer Culture in the San Francisco Bay Area (1996), Queer Pulp (2001), The Transgender Studies Reader (2006) and co-wrote, directed and produced Screaming Queens: The Riot at Compton’s Cafeteria (2005).