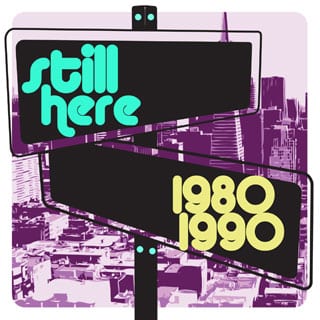 Still Here is back after a sold-out debut at NQAF 2013! With a fresh mix of new and returning artists, Still Here brings together queer/LGBTQI San Franciscans raised during the 1980s and 1990s — with the AIDS epidemic as a backdrop to their childhoods.

We invite you to join us as we re-imagine, re-invent, and re-examine San Francisco’s (queer) history around AIDS, sexuality, and community in two very special nights of literary arts and multidisciplinary performance.

Still Here stakes a claim to this city, disrupting the assumption that everyone in San Francisco is from somewhere else, and exposes essential narratives about coming out, class and economic disparity, and the meaning of home and family in a “gay mecca.”

By sharing their San Francisco stories, these artists add their voices to discourse about San Francisco and remind us that they are steadily “Still Here.” 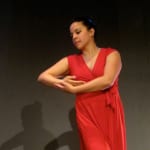 CRISTINA MITRA is happiest when dancing. A trained dancer since age 6, she has performed modern/contemporary, ballet, jazz, and ethnic dance at Smith College, Bates College, Boston University, and locally in Bindlestiff Studio’s Bakla Show II and Aimee Suzara’s A History of the Body. Raised in the Excelsior and Mission Districts, she is a 3rd-­generation Chicana-­Pilipina to call The City home. A passionate advocate for youth, she inspires young imaginations in the Bayview as an exuberant children’s librarian. She currently lives in Silver Terrace with her fiancée, artist and youth arts administrator, Aimee Espiritu. She is honored to produce/curate Still Here again with her homie since 1994, Natalia Vigil, and proudly offers the show to the collective fight for visibility and a right to home in SF for poor/working class people of color. 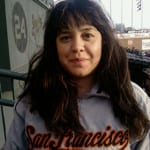 NATALIA VIGIL is the oldest of five sisters and a 7 year old brother. As a proud Chicana born and raised in San Francisco she is inspired by the city she grew up in and by the resiliency of her loved ones and community. She captures these stories and voices in her multi­genre writing. Her work has appeared in numerous publications and shows around the Bay Area, including SOMArts, Mission Cultural Center, Intersection for the Arts, National Queer Arts Festival and more. She holds an MFA from Mills College in Creative Writing, but got her start as a poet in first grade with her premiere work entitled “You make me glitter up” in honor of her first grade teacher, Mrs. Kahn. She loves collaborative projects and is proud to be curating Still Here with her bestie in the city she loves por vida. 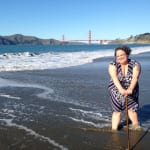 GINA DE VRIES is a writer, cultural worker, queer cripple, genderqueer femme, strega Paisan, fat sex worker, and devout pervert who is proud to call San Francisco home. Ze is founder & co­curator of the “Girl Talk” performance series, founder & facilitator of Sex Workers’ Writing Workshop, an alumna of St. James Infirmary, and on the Advisory Board at The Center for Sex & Culture. She holds a Master’s in English & a Master of Fine Arts in Fiction Writing from San Francisco State University. Ze’s performed, taught, & lectured everywhere from chapels to leatherbar backrooms to the Ivy Leagues, and her writing has appeared dozens of places, from the academic to the pornographic. Ze is currently at work on How To Have A Body, a book of experimental prose about the intersections of sexuality, gender, disability, and chronic illness. Find out more: ginadevries.com | queershoulder.tumblr.com | howtohaveabody.tumblr.com 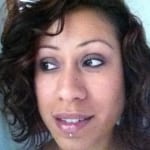 KAIRA PORTILLO ESPINOZA is a creative soul whose passion for life is fueled by exploring diverse art forms. Yoga and Capoeira will forever hold a special place in her heart. Writing poetry and cultural/educational articles helps her express the million thoughts flowing through her mind at any given moment in time. Theatre, though, is her first love! Born & raised in SF’s Mission District after her parents fled the horrible civil war in El Salvador, Kaira is the author of Poems About This Roller­-Coaster Ride Called Life; coming ­out letter to her parents is included in the anthology, Letters From Young Activists: Today’s Rebels Speak Out. Kaira Portillo Espinoza is grateful for the healing role art­ in its many shapes & forms­ has played in her life. She hopes to inspire people from all walks of life to become more in tune with their inner soul.

Fueled by life as an AfroMexican SF Native, 2 Gen American, Activist, Artist, and Non Able Bodied Trans* Person, MASON J‘s writing blends an unlikely pairing of grit, tenderness, and critical flippancy with a Queer Bay Area backdrop inspired by everything from Keeping Up with The Kardashians to Tamuzi poetry. Born & Raised in the Western Addition 3 blocks from the former site of Black Coalition on AIDS and also the son of a former AIDS care provider he’s thrilled to be included in this show. His photo work has appeared online, in many a zine, and in print various lit journal and publications. He also enjoys Tacos, Disposable Cameras, and Pinball.

JANINE M. is a poet, radical librarian & second-­generation Arab American San Franciscan, born and raised in the fog­-kissed paradise of West Portal and the Inner Sunset. She is a three­-time VONA/Voices workshop alumna & a winner of the Friends of the San Francisco Public Library’s Poets Eleven poetry contest. Her work has been featured in the journals 580 Split and Kweli, as well as the anthologies Dismantle: Writing from the VONA/Voices Writing Workshop and the forthcoming Writing the Walls Down. She has performed and presented her work in classrooms, cafes, libraries, and on stage in venues on both coasts, most recently in Washington, D.C. as part of the Split This Rock poetry festival. She is an avid reader, an ardent chef, an enthusiastic Sagittarius, and a fierce & fabulous San Francisco unicorn. 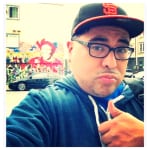 DANNY ROBLES was born and raised in the San Francisco’s Mission District. He is a graduate of the University of California at Davis where he earned his bachelor’s of arts degree in English with an emphasis in Creative Writing and Literary Theory. He also holds minors in Chicana/o Studies and African and African American Studies. Danny’s poem on Salvadoran transnational migration and diaspora was published in La Bloga in 2010 and his piece “With Love From The Moon” was published in the Fall 2013 edition of the Kartika Review. Danny was selected as runner up in the poet Joy Harjo’s “Crazy Brave” contest. He is currently working on a chapbook on the intersections of his biracial Filipino/Salvadoran identity and is hoping to form relationships with publishers. Danny is a second year participant of Still Here San Francisco. 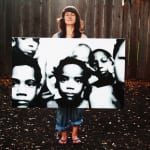 For first generation Colombian American graffiti artist, JESSICA SABOGAL, art serves as a haven, a tribute, and creative outlet of adoration and exaltation for women with stories often untold. Using a spray can, she reinvents what it means to be a female graffiti artist in a male­dominated medium and colors her canvas by unraveling stories she once heard, lived, struggled, and loved. She pushes the boundaries as an artist by utilizing her medium for social change, action, and empowerment.

Jessica’s newest campaign entitled, “Women Are Perfect (If You Let Them)” spreads this simple but necessary notion worldwide. The first installation of this project took place in September 2013 in Bogotá, Colombia in the form of a 50 foot by 9 foot outdoor mural. She designed the 20th Anniversary Cover for Plume Book’s Bastard Out of Carolina, made front page on CNN.com with her time­lapse tribute to Egyptian revolution, and is the first female artist commissioned to paint murals at Facebook Headquarters in Menlo Park, CA. Jessica seeks to connect the world around us with art that reminds all that women are to be valued, glorified, respected, and above all, loved. 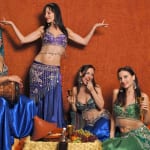 THREE SISTERS BELLY DANCE COMPANY: Over the last four decades, all three sisters grew up in San Francisco and after some stints abroad and afar ended up back here. Celeste and April were born here while Allegra was born on a hippie commune in the Northbay. Their mom was also raised here and since the late 60’s has remained an activist on the front lines against war, poverty, homophobia, and the environmental impact of corporate greed. Clearly, she raised them right: All three identify as queer bisexualfemmes, but as with any labels they relate to it very differently. They all have worked professionally and in their personal lives to empower women (and men), promote femme visibility, and celebrate femininity in all its manifestations. In her life coaching, April supports her clients in finding self acceptance. Allegra has a diverse background in non­profits and has been dedicated to connecting academic research with social change in vulnerable populations from veterans, to HIV+meth users, and older adults. She is currently completing her masters in Women and Gender Studies at SF State. Celeste has created a revolutionary method of embodied and experiential sex and relationship therapy. They have been dancing together for over 15 years performing nationally and internationally. 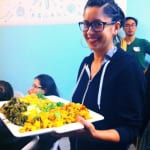 RACHEL VIGIL is a queer Chicana born and raised in San Francisco to artist and community organizing parents. She is one of five daughters and is solidly the middle child. She currently works at Mission High School overseeing Mission’s Agriculture and Food Program and teaches classes in Urban Agriculture and Cooking. She believes strongly in creating a socially just and delicious food system. She is ignited by listening to people’s life stories and by creating spaces for young people to create change around food. She seeks to create more visibility and access for working class communities, people of color, and youth in the local and sustainable food movement. Her favorite foods are cake and kale. 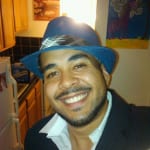 Carnelius Quinn believes that every day you should do 1 thing to improve yourself, and 1 thing to improve the world. Born and raised in the Visitacion Valley and Bayview neighborhoods of San Francisco, Carnelius is a Black, Gay, Spiritual teddy bear of love. He works to create spaces and opportunity for complex folks to be as complex as they need to be while navigating a world that tries to “simplify” them. Carnelius is the youngest son of a Pentecostal pastor, LGBT, HIV and youth advocate, and trains nationally to support various community organizations. His unique approach to this work developed through the finest youth development programs in San Francisco including: San Francisco Peer Resources, Youth United Through Health Education, and his beloved youth choir, Exaltation. Carnelius is an HIV test counselor and advisory board member with Magnet clinic in SF, and a Diversity trainer for the Court Appointed Social Advocates (CASA) program of Alameda County. Carnelius nurtures his spirit through dance (usually stomping down the streets of SF Carnaval), singing, and taking any opportunity to be as naked as possible in nature. He also dares, once in a great while, to share his story through performance.