June 20-22, 2019
Tomorrow We Inherit the Earth: The Queer Intifada
Artistic Director Zulfikar Ali Bhutto
Counterpulse Theater, 8pm
TIX: $20, No one turned away for lack of funds

The world has entered its third major intifada, an uprising of global magnitude. Queer rebel fighters in the Muslim world frustrated with the failures of past heterosexual leaders rise and begin a long battle to overthrow American and European intervention in the region, achieving what many in the past have failed to do. While the successes of the revolution continue to be lauded, its losses have been painfully felt.

Tomorrow We Inherit the Earth looks deep into a future of the Muslim world where rebels fight to finally overthrow Western Imperialist projects. In this intifada, strategies have changed and opulent guerrilla fighters, zombie soldiers risen from the dead and aliens summoned from the top of minarets, team up to reveal what it takes to build a revolution. 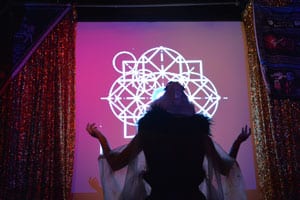 Zulfikar Ali Bhutto is a visual and performance artist, zombie drag queen – who goes by the Alias Faluda Islam – as well as curator of mixed Pakistani, Lebanese and Iranian descent. He is based in San Francisco, California where he received an MFA in Studio Art at the San Francisco Art Institute in 2016. Bhutto’s work delves deep into a futurist imagining of South Asia, the Middle East and the larger Muslim world, through a research based process excavating archives from disparate sources. He takes on histories of revolution, resistance and resilience and queers them using his body as a filter through a multi-media practice based primarily in the realm of future story telling.

Anum Awan (Video and Set Design):
Anum Awan (Video and Set Design) is based in the Bay Area. Awan is a designer + artist + organizer hybrid blending the past and the future to (re)imagine alternative narratives through art and events. Recently, Awan has been creating mixed reality installations based on themes in their life such as nostalgia, queerness, and immigrant identity.

Hushidar Mortezaie is a fashion designer, visual artist, and graphic designer. He was born in Tehran and immigrated to the Bay Area in 1975. He moved to NYC in 1994 for 10 years ,and now resides in California, living between Los Angeles and the Bay Area. Mortezaie’s work spans the mediums of textile, packaging,graphic design, painting, and fashion. Conceptually, his work dives into the junctions of gender, politics,identity, and archive while holding a mirror to the intersection of mass consumption and stereotype through branding, propaganda, and the cult of celebrity.

Taj is an interdisciplinary visual artist based in Durham, North Carolina. Heavily inspired by Islamic stories and speculative fiction, Taj remixes cultural and religious references to explore themes of hybridity, the gaze and apocalypse.

A Queer Rebels board member since 2012, Crystal co-founded Luna Sea Women’s Performance Space and was Executive Director of the Jon Sims Center for the Arts. In Berlin, where she lived for 9 years, she co-owned Schoko Café, a women’s art and culture center. In San Francisco, she was an organizer working with ACT UP and the San Francisco AIDS Foundation, and also worked on Electric City Queer TV. Recently, she co-produced the multimedia theater piece Hey, Sailor and created 3 short films: In My Blood, I Know My Soul, and In My Own Hands. In 2016 she created a multimedia performance/installation at Fort Mason as part of the THIS IS WHAT I WANT Festival 2016 titles There is No Other, Fractured And Complete, Tell Me Something True.

I’m drawn to the generative possibilities of poetics, mysticism and subliminal states to subvert the black-and-white reductions of cultural identity (via birth) and state identity (via naturalization). Through social practice, video, sound, and performance, I work with archives and aesthetic production rooted in the Muslim world that have been marginalized both within conservative Islam and in the Western imagination. I am interested in feminist modes that intentionally avoid referencing the standardized feminist model, and in exploring cultural expression outside of traditional, “othering” notions of ethnography. By creating kinetic communal experiences beyond language, I trace an imagined geography for immigrants and diaspora populations, mining the collective subconscious, nostalgia and fantasy around ideas of “homeland” to transcend and integrate our varied cultural identities.

Abad is based in the Bay Area and is a queer social practice performance artist investigating futurity through an intersectional lens. Holding identities that traverse a multitude of geographical and enthnosocial landscapes, jose’s practice excavates the wisdom that exists in the body that the mind has forgotten or dominant culture has erased.

Additional Credit
We would like to thank the MacroWaves team and Jacob Ward for the fabrication of our set design.